🔘A Bengali newspaper was published in 1876 in a small village of Magura at Jessore District in British India (now Bangladesh) by Tushar Kanti Ghosh and his father Sisir Kumar Ghosh. They named it Ananda Bazar after Tusharkanti's grandmother's sister Anandomayee. However, soon the newspaper died. In 1886, Ghose published another newspaper, named after his grandmother Amritamoyee: Amrita Bazar Patrika.
Later in 1922 the newspaper Anandabazar Patrika was relaunched by proprietor Suresh Chandra Majumdar and editor Prafulla Kumar Sarkar. It was first printed on 13 March 1922 under their ownership and was against British rule.In 1922 it first published as a four-page evening daily. The first colour printing was the features section. The internet edition of the newspaper was launched in 2001, which publishes news among the community. Also provides advertisement in the printed newspaper. In 2010, Time Inc. entered into a license agreement with ABP Group to publish Fortune India magazine. This magazine publishes the Fortune India 500 list every year. 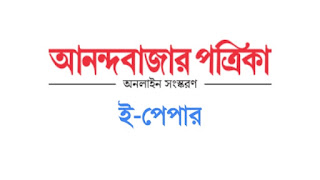