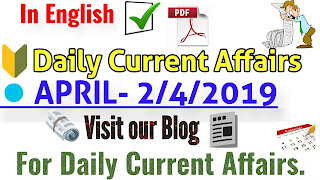 🔵April 2 is celebrated all world over as World Autism Awareness Day and April, the month for autism awareness.
The theme for this year is Assistive Technologies, Active Participation.

Autism Spectrum Disorder (ASD) is a neurodevelopmental disorder which affects communication and socialisation.

They have difficulties with making eye contact with people, using gestures and actions for communication.

Currently, studies say one in 59 children have autism.

Millions of Algerians have been holding weekly protests nationwide calling for the 82-year-old Bouteflika to step down after almost 20 years in office.

He has rarely been seen in public since he suffered a stroke in 2013.

Kandhamal haldi is organic by default being cultivated by more than 60,000 families.

🔵The colour of Kandhamal haldi is golden yellow being well distinguished from other varieties.
4. India and Chile signed three MOUs
🔵India and Chile signed three MOU for cooperation in the fields of mining, culture and Empowerment of persons with disabilities.
The agreements would further enhance engagement in economic, social and cultural fields between the two countries.

Chile is the sixth largest trading partner of India in the Latin American region.

They also agreed to work together to strengthen the global response to defeat and destroy terrorism in all its forms and manifestations.

Cities in the 12 contiguous districts of Rajasthan and Uttar Pradesh, as well as the city of Agra, switched over to the cleaner fuel.

Rest of the country will follow suit from April 2020.

In 2015 India had decided to leapfrog to Euro-VI emission norm compliant petrol and diesel from April 2020, from the Euro-IV grade at present.

The move intends to meet the durable liquidity needs of the system.

It is the second such auction within a month.

Earlier, on March 26, the central bank had bought USD 5 billion through similar swap auction in a bid to ease liquidity ahead of elections.
7. Sawhney takes over as Chief Executive of ICC
🔵The International Cricket Council (ICC) announced that Manu Sawhney will assume the position of Chief Executive with immediate effect.
Sawhney has been working alongside the outgoing Chief Executive David Richardson for the last six weeks.

Richardson will remain with the ICC until July as originally planned to oversee the delivery of the ICC Men's Cricket World Cup 2019.

He stepped down as managing director and CEO of Ashok Leyland on March 31.

On the last day of the competition, Yash Vardhan and Shreya Agrawal bagged three gold medals each.

Designed with by Way2Themes | Distributed by Blogspot